Prof. Rumyana Stoilova, President of BAS, on Bulgarian National Radio on the topic “How sociological agencies can change attitudes to voting and how to recognize manipulations”

The Bulgarian Sociological Association works to increase the trust in the accuracy and reliability of the sociological results, as well as to increase the ability for informed choice of the citizens, which will be based on reliable and valid information and forecast. Civic education is the way to destroy the huge machine of censorship, stereotyping and dramatization of the situation, writes Walter Lipman in his book Public Opinion. And that means:

The Code of Ethics of BAS, adopted in 2004, sets requirements for the communication of research data in the media. According to Art. 14. (4) When disseminating data from sociological surveys, information about the research methods and the sources of information shall always be provided in accordance with the requirements established in the sociological community. Upon completion of the study, the primary individual information is available for control of its methodological validity by the professional community.

It is good for citizens to monitor a few critical indicators that agencies tend to report incorrectly or omit at all. It is key to know who sponsored the study. A study costs a lot, it is an investment, so this factor is indicative. It is important for citizens to be aware which media publishes a survey results.

According to a study by a colleague from UNWE – Chief Assistant Dr. Marieta Hristova, there is unspecified funding in one or two of a total of more than 30 surveys for each of the elections in 2021. However, over half of the surveys indicate “own funding”. Citizens need to be extra careful when they see this information. Although not illegal, this indication may also be a refusal to disclose the actual source of funding.

When reading survey results, it is important whether it is representative and how respondents are selected. Dr. Hristova’s research notes that over half of the surveys conducted in 2021 lack information on representativeness, and only representative surveys make it possible to actually talk about all voters in Bulgaria who have the right to vote. Lack of information on whether the study is representative is a risky point. It is particularly risky when it is related to the requirement to report the margin of error. Indicating the probable error is important so that we know how to interpret results with minimal differences. In order for the information used to be reliable, it is good to monitor the results of several agencies, the deviations between them and the validity of their past electoral forecasts.

List of publicly available data on agencies in Bulgaria

The Bulgarian Sociological Association (BSA) as a professional organization of sociologists is committed to the preparation of a list of publicly available data on agencies in Bulgaria that publish results of opinion polls (the list does not include market agencies that have not specified social and electoral surveys as part of their subject matter). The list is available on the BSA website HERE and will be updated in due course.

The program of the conference “Trust and Well-Being in the Balkans” (to be held via Zoom between 30th of September and 1st of October) is now available for download here.

We look forward to meeting you there soon!

The Philippine Sociological Society 2021 International Conference, will be held virtually, on October 1-5, 2021. The Conference is with the theme: The Sociology of Vulnerabilities and Resistance: New and Emerging Challenges on Lives, Communities, and Places. Full details about the conference, registration, paper submission, and FAQs may be found in the PSS website: http://philippinesociology.com/2021-pss-international-conference/ 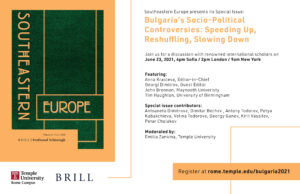 a presentation of the Special issue of journal Southeastern Europe, published by the renown academic publishing house Brill. Anna Krasteva is the journal’s editor-in-chief and Georgi Dimitrov is a guest editor of the current special issue, focusing on Bulgaria’s socio-political controversies. You can find more details in the Facebook event, which will take place online on the 23th of June from 16:00 (EEST)

Prof. Petar Mitev in the intergenerational dialogue between sociologists in Bulgaria

Prof. Petar Mitev in the intergenerational dialogue between sociologists in Bulgaria

Chair of the Bulgarian Sociological Association

The role of prof. Petar Mitev in the intergenerational dialogue between sociologists in Bulgaria is superbly represented in the publication “To Shift Barriers: Disciplines, Epochs, Generations”, an edited volume of academic texts in the fields of sociology and political science.

The editors, prof. Svetla Koleva, prof. Pepka Boyadjieva, prof. Petya Kabakchieva and prof. Rumyana Kolarova invited 29 scientists from different generations and disciplines, united by their interest in the work of prof. Petar-Emil Mitev. I am convinced that the volume, in addition to showing our respect and appreciation for the contribution of Prof. Petar Mitev to Bulgarian sociology and the study of politics, will be permanently featured in the pedagogical toolkit that we are to use in training and guiding future sociologists and political scientists. This impressive volume will serve as a reference guide for those of us, who are looking for a point of reference on all key sociological debates.

In the spirit of intergenerational continuity and in my capacity as the current President of the Bulgarian Sociological Association, I go back and reread the texts of Prof. Mitev from the period when he was the president of the BSA. In his 1991 speech he claimed that the task of the Association is “qualification” – a response to the need for our colleagues to seek professional fulfillment in a dynamically changing social environment.

In 1995 prof. Mitev spoke about the BSA and about the sociological point of view, about the scientific discipline “sociology of sociology” [1].  It is very interesting for me to return to the main functions of the BSA that he highlights at that time in order to assess how far we have come today and what remains a challenge for the professional community, to what extent we have fulfilled his expectation at the time then about the “optimistic outlook” for the BSA.

BSA’s main purpose, Mitev holds, is to consolidate the sociological community. His diagnosis is as follows: “sociology turns out to be a profession with too blurry and easily crossed boundaries” (Mitev, 2016:93). That is true. This is a challenge for our profession today as well. The principle of development through competition and internal professional regulation through a Code of Ethics are both a fact. A Code of Ethics has been adopted, but its application remains not particularly effective.

I would like to point to the particularly important, but not yet realised goal of the BSA – assisting the creation of a National Sociological Archive as a condition for optimal professional activity. Without it, in the words of professor Mitev, “Sociology loses the prerequisite which is the basis for all progress: amassment, accumulation” (Mitev, 2016:94). Featuring the archive database for the social sciences in the national research infrastructures should become a priority for all sociologists and political scientists, both academics teaching at university departments and conducting research at BAS, as well as those at social research agencies, the civil sector and ministries. Only by joining forces will we be able to accomplish this important goal of the BSA. Its realization will benefit intergenerational dialogue and preserve the potential of social science, such as empirical data and publications, which are currently scattered and inaccessible to a wider audience.

At the Ninth Congress of the BSA and its accompanying annual conference in 1999, 10 years after the fall of the Berlin Wall, professor Petar Mitev posed the question of how the BSA fits into the broader context of transformation; he problematized sociology as the subject and object of social critique. Moreover, alongside the already established in previous BSA Congresses goals, he added the critical goals of consolidation, institutionalization, of civic stances, and of scientific communication within the professional community. “The critical function of sociology is to place relevant issues… in the context of systemic relations and variants of social development. Then both political bubbles and mass illusions become visible. And it is then that criticism does not turn into nostalgia, self-flagellation or catastrophic attitudes” (Mitev, 2016:111).

I could go on citing the texts of professor Mitev about sociology and the professional association of sociologists, but I  need to mention his outstanding contribution to the research of youth in the changing Bulgarian society of the 1970s, 1980s, 1990s and the first decades of the 21st century. As if from a “sociological observatory”, he analyzed, with his imagination and insight, “what and how is transmitted from generation to generation” and “drew conclusions about the nature and perspective of social development itself”. Again, his warning that studying young people ‘opens a heuristic, but not an unproblematic path to the secrets of society’ is important (Mitev, 2016: 290).

Thank you, professor Mitev, for your imagination and talent, for your perseverance in advocating for sociology as a science in Bulgaria and beyond. I would like to join Ivan Szenelyi in wishing the celebrant: May you live until 120, dear professor Petar-Emil Mitev! Wishing you good health and a long life! Remain just as engaged and dedicated to the rationalization of social life!

[1] P-E. Mitev, 2016. Bulgarite. Sotsiologicheski pogledi. Iztok-zapad. The archive of the Scientific Institute for the Studies of the Youth has disappeared without a trace, and by the looks of it, it has been “destroyed”, according to professor Mitev, 2016: 105. The archive of the National Center for Study of Public Opinion is also missing or unusable.

No copyright information has been saved yet.